I was going to title this post A Willamette River Swimmer in the Tennessee River, until reflecting on a comment from one of my elementary fluency students, who heard I was flying to Tennessee to swim ten miles. “I I I heard you swam all around Hagg Lake! Th th that’s so far!” Hagg Lake obviously isn’t comparable to swimming downstream in the Tennessee River, like the Willamette River that divides west and east Portland is, but it is the closest open water to Forest Grove, Oregon where I live and work (approximately 7 miles away from Forest Grove). Hagg Lake is an artificial lake (created by a dam) fed by Scoggins Creek, that meanders from the Northern Oregon Coast Range. I actually only hopped in their once this fall, about three weeks prior to leaving to Tennessee, and wasn’t eager to go back after getting stuck in thigh high mud under low circling turkey vultures, occasionally diving to the surface to pick at a fish carcass. I pictured myself meeting my end in my swimming suit, stuck in wet, quicksand-like clay (like Br’er Rabbit covered in tar), as Tiernan and some unknown fishermen watched from the tree line above. Anyways, since I was embarrassingly and laboriously able to extract my legs from the muddy clay, and as many of my students are familiar with Hagg Lake, rather than the Willamette River (that’s about 45 minutes from Forest Grove in rare, ideal traffic), I’m titling this post for them.

Image Above: My one fall Hagg Lake training swim from September 20, 2018 as recorded by my Apple Watch. The image makes it appear as if I started recording in the water and turned around before reaching the other side, but really the water level is so low in the fall, I walked out through mud to get to my starting point, and turned around as soon as I could see the murky bottom on the far side of the lake.

Traveling to Chattanooga was a feat in itself. I like to support Alaska Airlines, the local airline, and had a companion ticket expiring in November, that I used for my safety kayaker. We were supposed to fly to San Francisco, leaving at 6:30am and then to Nashville (arriving at 6:50pm central time), where the rental car would be waiting. We left my house at 2:00am, parked in Beaverton, Oregon at my friend Jo’s house, walked to the Beaverton Central Max (light rail) station (where we were serenaded by an extremely inebriated older gentleman), boarded the first Max Red Line train to the airport at 3:28am, and were at our gate ready to board at 5:50am just in time to hear the announcement that the plane wasn’t functioning properly, but someone was coming to assess the situation. The plane was never approved for take off and after a two hour wait, we were bumped to an American Airlines Flight to Chicago, then Nashville that would be leaving at 1:50pm. We ended up, stumbling over our feet from exhaustion, into the Chattanooga Clarion at 3:00am Eastern Time. The return flight was significantly better as it departed on time, but it left Seattle 1.5 hours late putting us back in Forest Grove at 11:30pm Pacific Time Sunday night. I somehow still made it through the work week, although I still feel like I’m catching up on sleep.

The swim felt fantastic! Definitely not a “bummer tent” (Michelle read my last post and corrected me. It’s not “bummer ten,” but “bummer tent,” like you’re at a big music festival and end up in a lousy tent). The “Girls Just Wanna Have Fun” chorus alternated with Seal’s “Kiss from a Rose” in my head the entire swim, thanks to the early morning Nashville radio station. The water was warm. Hagg Lake, the Columbia River, and the Willamette River have been hovering around 60 degrees Fahrenheit while the Tennessee River stretch past Suck Creek was in the mid to upper 70s. There was also a strong current, making it a fast ten miles. I finished 37th/105 in 04:10:06.515. I also enjoyed all of my feeds. I had four different water bottles filled with goodies I found at the Chattanooga Whole Foods. An orange electrolyte drink, Chicken Bone Broth, local Chocolate Milk from Tennessee, and a mixed Coffee shot drink. This was much improved from the chalky powdery protein drinks I had when swimming around Mercer Island last June. After the swim, I got to choose a beautiful mug from a local potter as a keepsake, and met Shannon Keegan and Todd Lantry. They were stranger swimmers from Southern, Oregon who, I happened to meet on the beach post swim. Todd and I finished together 36th and 37th after swimming near each other for several miles (I could see his beard when I breathed to his direction around mile seven and assumed he was a Portlander. He’s actually from Seattle originally, so a Washingtonian like me!), and Shannon and I finished back-to-back in the Mercer Island Marathon Swim, but never met as it was so cold and rainy that day, we all just ran from the finish to our cars to warm up and get out of there! After visiting with other swimmers and enjoying sweet iced tea (since I’m celiac disease and gluten free, I couldn’t have the beer from Chattanooga Brewery), I rounded out my Chattanooga experience with 1) a trip and tour to Chattanooga Whiskey, 2) dinner at Meats on Main, and 3) a Ron White comedy show at Soldiers and Sailors Memorial Auditorium. This was my first out-of Northwest state trip ever, as previously I’ve only been in Washington, Oregon, Idaho, and California. I can’t wait to go back and experience more, but that was all I could squeeze in this year! 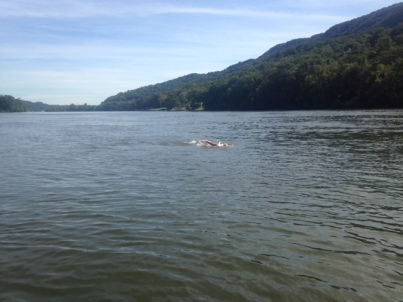 Above Images: Map recorded from my Apple Watch during Swim the Suck. The battery died at 9.27 miles so didn’t quite record the finish, and me testing out the water at the race start, October 12, 2019, the day before the event.

Ok. I actually need to be packing and heading to bed, but want to post this experience first, as my next swim “Couch to North Channel Training Swim no. 2,” is tomorrow. This swim was not planned/finalized until three days ago. I have a pilot reserved for my North Channel attempt June 24th to June 28, 2019, but in order to qualify for an observed “North Channel” attempt, you have to qualify by meeting Irish Long Distance Swimming Association criteria. One of the criteria for solo swimmers is a six hour swim in water of 13 degrees Celsius (approximately 55 degrees Fahrenheit). I’ve swam seven hours in water approximately 60 degrees Fahrenheit, but I’ve never attempted a longer swim in water chillier than that. Tomorrow will by my first attempt (and hopefully only needed attempt) up north in Puget Sound, off Bainbridge Island, where the water temp is hovering around 54 degrees and only getting colder between now and March. The pressure is on! I will have to attempt another qualifier at this temperature before spring, if I don’t make it tomorrow. Wish me luck!